The Car Festival or Rath yatra of Baripada

Baripada  hosts the second most popular Rath Yatra of Odisha after Puri and so, is known as Dwitiya Srikhsetra (Second Srikhsetra-Puri). Baripada’s Ratha Yatra is popular for its unique culture, pulling of  the Chariot or Ratha of Maa Subhadra, only by the women. The women can be seen in all vigor and spirit, pulling the chariot. The chariots like the crowds are big. Baripada is the most favored destination of women from all over. All women are eager to pull the chariots. 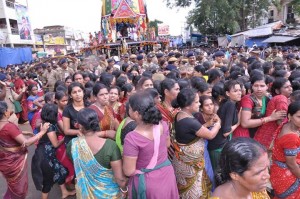 There are two Jagannath temples in the town. While the bigger one organises the car festival with three chariots, the other temple is referred to as Banthia Jagannath (dwarf god) where the deities are smaller and only one car is used in the festival to take the trinity to Gundicha temple. The culturally sensitive city not only attracts crowd from the neighbouring districts, but also from other areas of bordering Jharkhand and West . The density of the crowd and the size of the chariot in Baripada also stand next only to Puri.

Thousands of men, women, children come from every corner gather at Baripada to pull the chariots of Goddess Shubhadra, Lord jagannath, Lord Balabhadra on the grand road or called as Bada-danda. The three chariots are decorated with pure cotton and the beautiful chandua decorated all over the Chariot/Ratha.

However, what puts Baripada on the top of the chart relating to rath yatra celebrations is perhaps the association of women with the festival. While the buzz around women empowerment is catching up with the active participation of the self-help groups across the state, Baripada was there to lead the path, decades ago. During the celebration of first International Women’s Year in 1975, the district administration of Mayurbhanj had started the innovative idea to let women pull the chariot of the little sister of the two Lords — Jagannath and Balabhadra. In India, 1975 is known as the year of Emergency. But for the car festival in Baripada, the-then district collector Bibekananda Pattanayak took the initiative to start the unique tradition in the same year. It may be a coincidence that in 1975, Mrs. Indira Gandhi was the PM of India and Mrs. Nandini Satpathy was the CM of Odisha and this year was declared as International Women’s Year, from which, the women are pulling the chariot of Devi Subhadra, also known as the “Shaktee” to symbolize the empowerment of the women at Baripada and now-a-days, many places in India are hosting the Rathyatra, following the tradition of Baripada by involving the women in pulling the chariots. 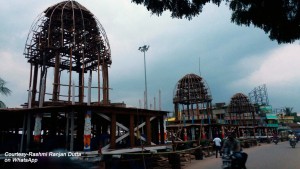 During these 9 days, the small township of Baripada wears a different look with three gigantic chariots of Lord Jagannath, Lord Balabhadra and Devi Shubhadra, criss-cross of light and thronging of large number of devotees coming from different parts of this District as well as from the neighboring districts and the states. The Nine days festival on Badadanda fills the heart and mind of the devotees with religious sentiments as their faith goes like this- ‘touching the rope of Ratha of Lord Jagannath would mitigate the pain of rebirth and immortal soul would mingle with great soul of greatest creator of this Universe’. Whatever may be the truth behind it,  Ratha yatra or Ghosha Yatra of three deities are performed with religious thoughts and enthusiasm which is simply beyond description. The construction of Huge chariot begins on the Akshaya trutiya (Shukla Trutiya of Baishakha) day.

The Ratha Yatra comprises of the following schedule in general-

The three deities arrive on the respective chariots after ‘Pahandi’. The pulling of the Chariots begins the next day at about 2:30PM and continues until 5:30PM. The 14-wheeled ‘Taldhwaja’(the chariot of Lord Balabhadra) moves first and reaches the ‘Mausi-maa’ temple. Thereafter 12-wheeled ‘Devidalan’or ‘Vijaya’(chariot of Devi Shubhadra) is pulled only by ladies.Normally this chariot reaches half-way and stops near the town police station. Till this time, the evening arrives and so the pulling of chariots is stopped for safety and security reason. Next day at about 2:30 P.M the pulling of chariots is resumed and ‘Devadalan’ reaches the destination, the Mausi-maa temple. Then starts the “Nandighosh”(the massive chariot with 16 Wheels-largest of the three-of Lord Jagannath). With the accompaniment of resounding conch shells “Ghantas”, the chariot Covers the distance majestically swaying both ways. The length of Badadanda from Shri Haribaldev jew temple to Mausi-maa temple is 3000ft. When the chariots reach Gundicha temple, jaggery laddoos are thrown from the cahriots to the frenzied crowd that jostle for a grain of sacred prasad.

On “Bahuda” Day, observed on Ashadha Shukla Ekadashi tithi, the same rituals of Pahandi are performed and chariots pulling is completed again in two days. As there is no space for the chariots to move around, the reverse sequence is followed in the return journey-First starts “Nandighosh”, then Devadalan and then the “Taladhwaja”. Then the 3 chariots arrive at the Bada-danda. The 3 deities give darshan to the mass till the next evening, followed by the Pahandi bije of the deities inside the temple.

This same schedule is observed in the same ways also at the Banthia Jagannatha Temple, also known as “Sana Jagannath” temple where there exists a single chariot of comparatively smaller in size then the 3 chariots of Shri Shri Haribaladev jew and this single chariot also holds a specialty. This chariot is being pulled only by the children. 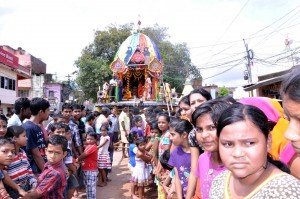 The detailed schedule for the current year can be found here.